I have heard it said before that to transplant a Joshua Tree (which can live up to 100 years), you must face it the exact same way that it has been growing originally.

As a recent transplant myself, I can understand this concept. I am experiencing so many new and disorienting views. Which way does the sun rise? When should I plant my spring bulbs? ‘Winter’ season is really just a ‘rainy’ season? Finding my mooring has probably produced some proverbial yellowing of leaves and a few dropped blooms.

Going too far with this plant analogy?? Regardless, seeing these gorgeous trees making their way out in the deserts of southern California was absolutely intriguing. I couldn’t stop staring at them. They start out as a rosette with no stem at all. Over time they produce the thick trunk and branches. Quite a transformation and a fantastic lesson on adaptation.

Scott is in Los Angeles (technically a suburb to the east of LA, in Ontario, California) for a week of training. So of course I came along for the experience. Unfortunately, we won’t be able to do as much sightseeing as we would if this were a vacation, but we are determined to cram in as much as we can while we are here this time. Future visits already in the planning stages.

This post is very picture-laden. I try to limit pictures on my posts but I couldn’t decide which ones to leave off. I will try to limit the pictures on the subsequent days. (Although ‘editing’ has never been my forte’.)

We had 3-4 highway choices to drive from Sacramento to LA. Taking Highway 1 is on our California bucket list but that’s something we want to take our time enjoying. We opted for Highway 99 which for a great deal of the way could have been a trip through the Midwest – if you replace the corn and wheat fields for acres and acres of nut trees. It took us straight down the middle of the state.

It’s a little difficult to see that this Halo building is a BUILDING. Full-size, large building in the shape of a Halo bucket of mandarin oranges. (One of my favorite treats!)

We stopped in Bakersfield, California at a fruit stand/nut stand in the middle of an orange and lemon orchard. We sampled ourselves to death and then bought a number of trail mixes, red pears sweet Medjool dates, and lusciously sweet apples. 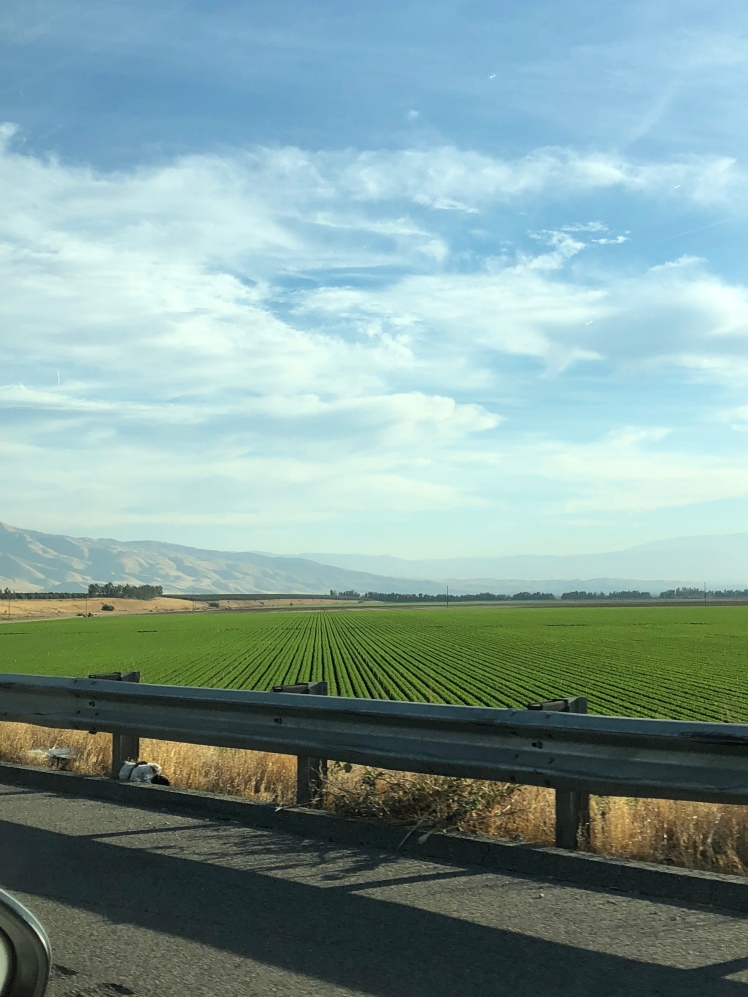 A number of years ago we were in Salt Lake City for three weeks and I fell madly in love with the Wasatch Mountains. Driving through the San Joaquin Valley, the Sierra Nevada Mountains had a similar look. I like the baldness of the mountains. You can see the rock and the formations so easily (as opposed to the beautiful pine-covered mountains of the Rockies.) There is something about their rugged terrain that conjures of western stories and cattle drives. 😉 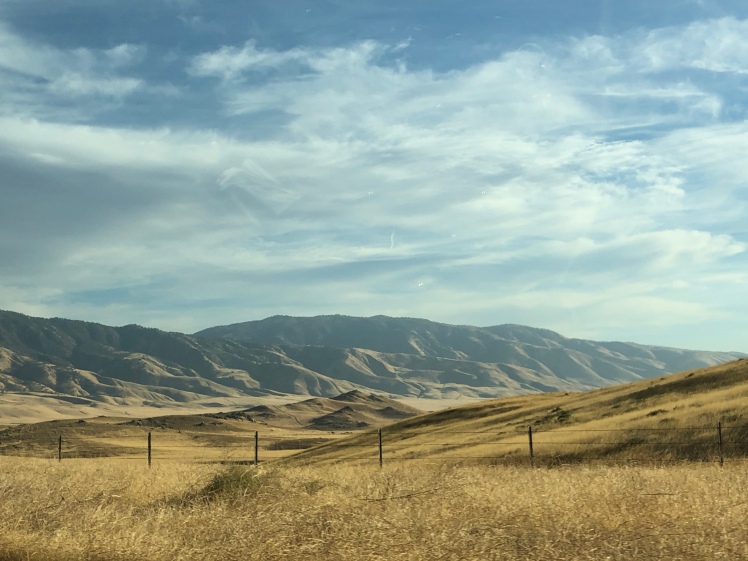 The burned grasses (which seemed much more beautiful than green pastures) reminded me of the Andrew Wyeth painting of the girl on the hillside (Christina’s World). Maybe it was the time of day when we drove through. The late afternoon shadows made everything so much more magical. 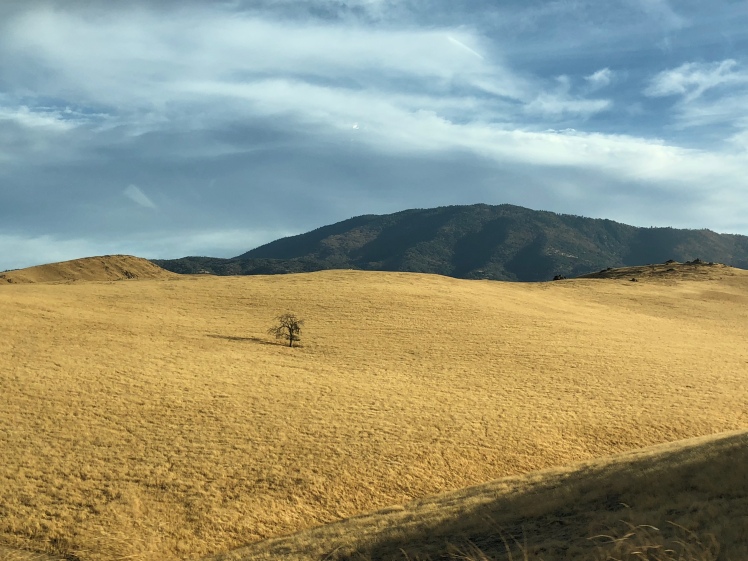 We saw quite a few railroad tunnels as we drove through the mountains into Los Angeles. It is difficult not to imagine the workers who forged those tunnels decades ago. How many lives were lost? How long were they away from their families? There is a route in Sacramento where Scott works that the engineer and conductor must take a special bag filled with air tanks. Should they ever get stopped in the tunnel, they would eventually suffocate because of the length of the tunnel, the engine exhaust…

(I MUST figure out my video settings and why they appear to be sideways. UGH. My apologies. They play the right way up though…)

This is a little glimpse into how I could spend the rest of my life. They are living their best life!!

Somewhere around Bakersfield we encountered the most wind turbines I have ever seen in one place before. It was exciting. Oh how I wish Kansas would get on board with capturing the amount of wind that state produces! When I worked for the U.S. Green Building Council, the chapter in California was always heads above the rest of the state chapters. It is one of my favorite things about California – their attention to the environment.

Then all of a sudden, while I was concentrating on the wind turbines, here came a little engine that could…

Scott says there are some mountains out here where the train actually passes its tail-end as it winds its way around and around. 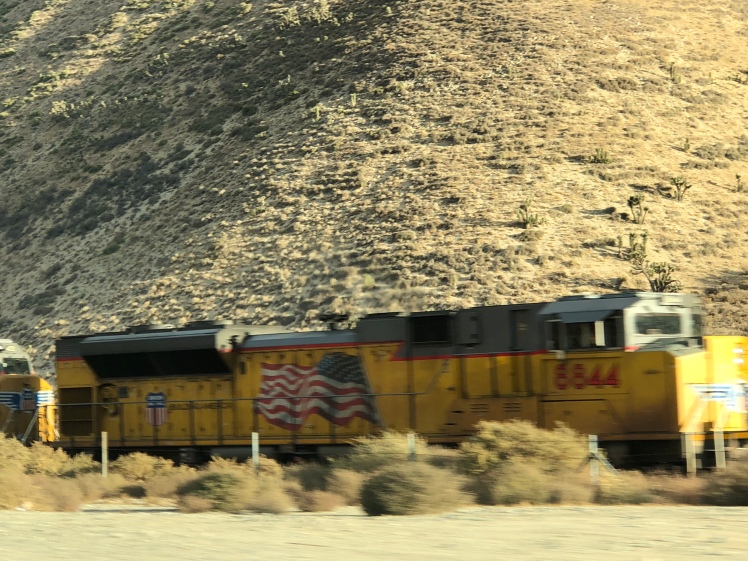 My favorite view of the mountains is through the hazy early morning or late afternoon. It looks like it is straight off a 70’s album cover. Maybe Lobo? Me and You and a Cat Named Blue? (We should have named Haddie ‘Blue’…which, for the record, she was riding along with us in the backseat. She has VERY unwillingly become a traveling cat!) (Not living her best life.) -ha. (Even though she is a very easy traveler.) 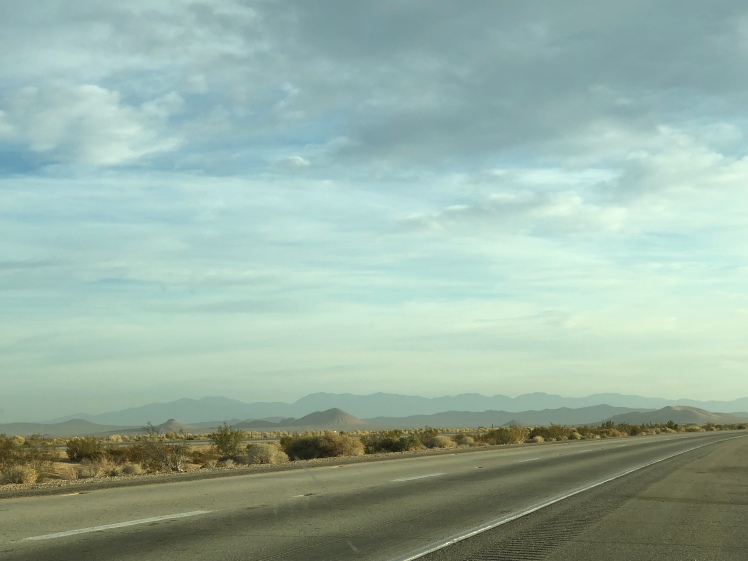 After leaving the orange orchard fruit stand, we put our big bag of goodies in the trunk. Silly us. Not long down the road we had to stop and get them out for a quick taste. These honey covered sesame sticks were awwwwwesommmmme!!!!!!

Orange slices will forever be my travel food of choice. My sister makes so much fun of me for that. I am squarely in the gummy bear area of life!! These were so juicy. You have to eat one by chewing it all up together. The next one requires patience as you first let the sugar melt off before biting into it. (Although this feat usually ends up much like the ‘how many licks does it take to get to the center of a Tootsie Roll pop’!)

More of this stubbornly beautiful tree… 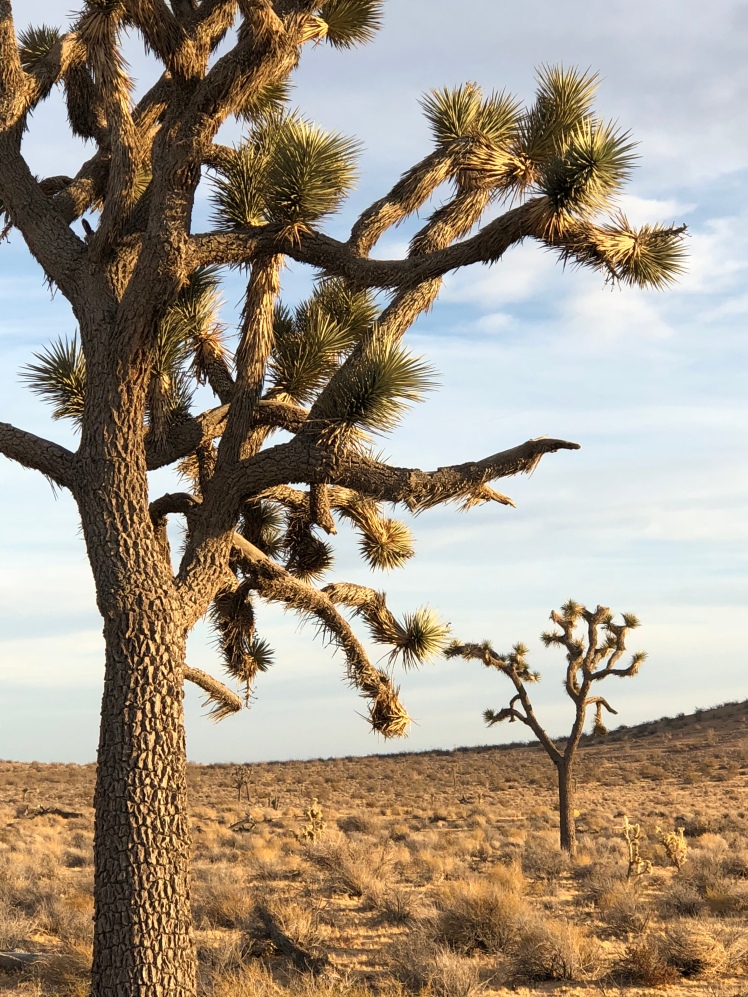 We didn’t quite make it to our destination before the sun went down. But boy was it a beautiful sunset as we made our way through the mountains into the LA basin. 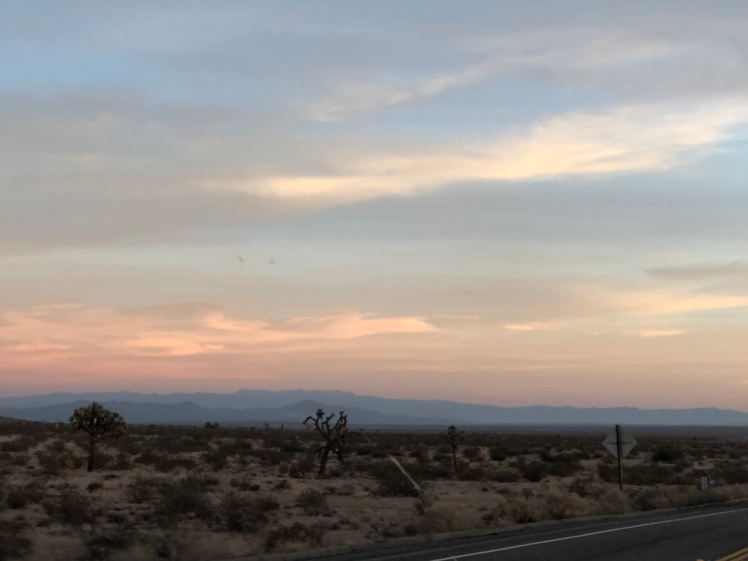 I told Scott these power lines looked like a man and a woman. Don’t you see it too?! Maybe the drive was getting a little long at this point…

A wanderer I will always be.